I’ve just come back from the third performance of The Dark Ages at this year’s National Arts Festival. By far the best of the lot until now.

I’ve been in a bit of a weird head space in the weeks leading up to the festival and this bled into my initial performances for the show as well as Lambs to the Laughter – our ensemble show featuring young comics Kate Pinchuck, Mpumelelo Malumo and Brad Lang.

It’s been a super stressful few months back in Joburg, but today was an important mental shift. I had three performances on the cards.

Lambs went well and the effervescent Angel Campey joined us for a really fun run this afternoon at 14:00. It’s been so awesome connecting with her and get to know her better. She’s one of the many comics whose work I’ve watched from far and she’s a really lovely human. Super sharp. 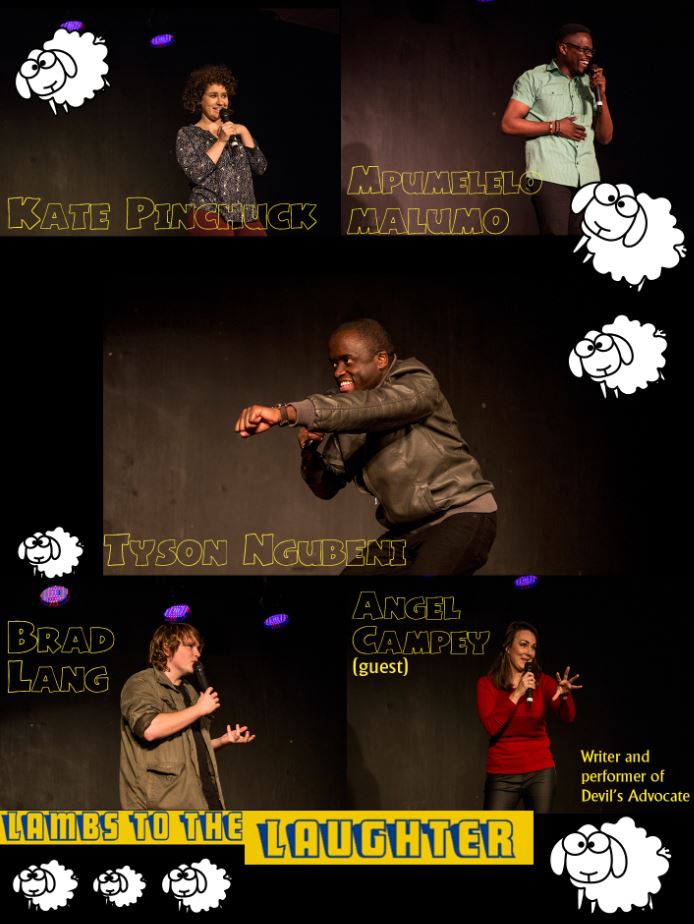 After saying my goodbyes to my family, who were in town to see the shows, I headed straight to the 1820 Settler’s Monument to host the Sundowner’s Concert – a free, packed-to-the-rafters showcase of nine acts that present five minutes of their shows.

It was fun getting the crowd worked up into a hype.

I got to the venue for Dark Ages early and focused on getting as relaxed as possible, while making a mental notes to include all of my beats in the correct order this time.

The show was fairly close to capacity this time around and it got off to a really good start. Connection (with the audience), openness and a real sense of truth. My heart was much warmer.

It felt really moving to connect on a human level again and I was really happy to overcome what was threatening to be a very big mental hurdle. Breakthrough!

I’m super excited to opening up and being as honest as I can for the rest of this comedy journey at Fest. It was also super cool to see comedy heroes Tats Nkonzo, Ryan Harduth and Schalk Bezuidenhout in attendance.

It’s also been cool seeing friends do their best in their productions. Thembela Madliki, Mike da Silva, Sam Pennington, Masixole Heshu, Buhle Ngaba, Mathabo Tlali and Mmatumisang Motsisi are just a few of the many thespians I know blazing a trail in theatre and it’s super encouraging and inspiring.

Not to mention the comedy exploits of Daniel Richards (State Fracture; Pay Back the Curry), KG Mokgadi (Heavier), Virgil Prins (Unnecessary), Mojak Lehoko (How Did I Get Here?; Rewriting History), Dalin Oliver (Face for Radio) and more. This year really is a feast of quality comics from across Mzansi.

Here’s to more growth in theatre and comedy!

I write and burst into characters on stage and screen. Comedian, actor and voice artist. View all posts by Tyson Ngubeni