I was recently on set for what’s probably my favourite shoot of all time.

It took most of a weekday evening – we wrapped sometime towards 23:30 – and I had so much fun reprising a role played during last year’s Microsoft ad campaign. This time, we shot something on a tennis court, meaning I had to rekindle a relationship with somewhat rusty tennis skills.

The prospect of serving in a way that looked decent gave me the most stress, but it came off alright in the end. I’m really excited for the final product and to share it with you.

Last month, I was privileged to be part of an ensemble comedy special: Showmax’s Funny People Africa. It’s a collection of comics from across the continent in a six-show special that drops at the end of March 2019. 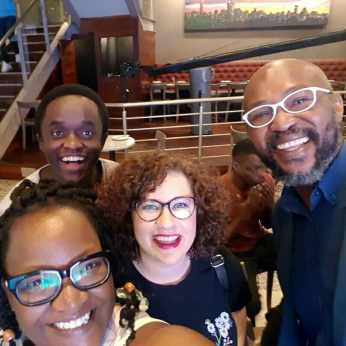 I saw it as a chance to finally record material which has never had its time under the glare of cameras, so it was great curating material which would make for a solid 10 minute showing.

It was a great chance to connect and catch up with some brilliant comics and I’m excited for it to come out.

I really hope you’re having a good week out there.

I write and burst into characters on stage and screen. Comedian, actor and voice artist. View all posts by Tyson Ngubeni